“I pledge that I will work to: restore liberty, not restrict it; shrink government, not expand it; reduce taxes, not raise them; abolish programs, not create them; promote the freedom and independence of citizens, not the interference of government in their lives; and observe the limited, enumerated powers of our Constitution, not ignore them.” 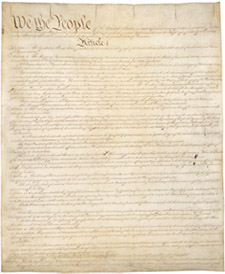 Statement of Principles & Positions
of the Republican Liberty Caucus

We believe every human being is endowed by nature with inherent rights to life, liberty and property that are properly secured by law. We support a strict construction of the Bill of Rights as a defense against tyranny; the expansion of those rights to all voluntary consensual conduct under the Ninth and Tenth Amendments; and the requirements of equal protection and due process under the Fourteenth Amendment.

We support the Constitutional restrictions on federal government powers enumerated in Article I, Section 8 as an absolute limit on all government functions and programs. We oppose the adoption of broad and vague powers under the guise of general welfare or interstate commerce.

We oppose all restrictions on the voluntary and honest exchange of value in a free market. We favor minimal, equitable, and fair taxation for the essential functions of government. We oppose all legislation that concedes Congressional power to any regulatory agency, executive department, or international body.

We support the Constitution as the supreme law of the land, the republican form of government it requires, and the right of all citizens to fair and equitable representation.

We believe these are also the proper positions of the Republican Party.

The first ten Amendments to the Constitution enumerate, but do not limit, the natural rights of every individual. These rights are intended to limit government action beyond the specified powers enumerated in Article I, Section 8 and should be broadly construed to recognize privacy and liberty rights expressed in the Declaration of Independence.

We oppose all restrictions on free and honest expression, most critically those that infringe on political discourse. We oppose any public financing of campaigns or public political forums and any law that allows organizations to collect campaign donations against the wishes of their individual members.

We oppose any restriction of free speech on the internet or in other media. We oppose any program to tax internet commerce or to tax or license website operators.

We support the separation of church and state as a safeguard of religious liberty and freedom of belief. We support an end to any government role in the definition or administration of marriage. Government involvement should be limited to the registration of civil contracts of union.

We support the original intent of an individual right to keep and bear arms.

We support the right of people to be secure in their persons and property and oppose any use of eminent domain except for essential government functions. We support initiatives in defense of medical, racial and banking privacy.

We oppose the expansion of the federal security apparatus and associated violations of individual liberty and privacy rights.

We support equal protection and enforcement of the law, including legal accountability standards for all public employees and severe restrictions on the invocation of ‘sovereign immunity’ to protect illegal and unethical government conduct. We oppose administrative regulatory initiatives which are implemented without legislative authorization from Congress.

We recognize the harm that drug abuse causes, but also that the ‘drug war’ has been ineffective and has led to terrible abuses of personal liberty. We favor flexible alternatives at the state and community level to combat the harmful aspects of drug use.

We oppose ‘litmus tests’ for judicial nominees who are qualified and recognize that the sole function of the courts is to interpret the Constitution. We oppose judicial amendments or the crafting of new law by any court.

The Constitution properly limits the federal government to specific enumerated powers. The Tenth Amendment properly reserves all other powers to the states or to the people. We support these limits on government powers and a phase out of all programs and departments that violate these principles, including:

We support the phase out of any government subsidies and incentives that support or favor any business or special interest.

We support implementation of the recommendations of the Grace Commission and the Council for Citizens Against Government Waste.

We favor the privatization of all government assets and a transition to free market management and services for all programs that exceed the enumerated powers of the Constitution.

We support the adoption of the ‘Liberty Amendment’ to the Constitution, requiring respect for enumerated powers and repeal of the Sixteenth Amendment.

We affirm the principle that individual rights and liberties are unlimited, as specified in the Ninth Amendment. No law should deny, disparage or restrict the right of every person to privacy, freedom of travel, association, possession of substances, or adult consensual behaviors. We oppose any requirement of government authorization prior to exercising those fundamental freedoms.

We oppose any seizure of private communications, absent the issuance of a judicial warrant showing probable cause that a crime has been committed. We oppose any constraints on the right of every person to associate with others of their choosing, participate in any activity or joint venture that is non-coercive, or freely engage in any mode of travel or social activity.

We support a complete transition and overhaul of federal taxation policy, after a national debate of alternatives to current income and withholding procedures, primarily focusing on a single flat income tax, replacement with a national sales tax, or other methods of funding federal government operations.

We favor the prompt and permanent repeal of all capital gains and inheritance taxes, as well as the special privileges and deductions in the current code.

We oppose all corporate and business taxes, which are a form of double taxation of the participants on the same income or profit.

We support reforms that respect the rights and obligations of parents to choose from among competitive educational services and provide for their children’s schooling. We favor private charity, endowments and scholarships and a phase out of all government controls.

We support an amendment to the Constitution requiring a true balanced budget, a super-majority vote on all tax increases, zero-based budgeting and public efficiency audits for all legitimate government operations.

We favor individual, family and community efforts to relieve the burdens of those who have suffered misfortune and innocent injury. Every individual has the right to the fruits of their own labor and the responsibility to support themselves and their families. The only true charity is found in the voluntary efforts of every compassionate person, independent of any government entitlements, dictates, or programs.

We support a responsible transition to private financial alternatives, rather than maintenance or expansion of compulsory government retirement, disability, and health programs.

The defense of the nation against foreign military aggression is a proper constitutional power and burden of the federal government. To provide for the common defense, it is authorized to raise and support armies, declare war, and enter into treaties.

We support a modern and efficient military capability that can promptly and overwhelmingly respond to any attack on the United States. We favor reasonable army, navy and air force powers, as well as space communication and anti-ballistic missile capabilities, suitable to detect and decisively counter any strategic danger.

We favor foreign military action only upon a Declaration of War by Congress in the face of an imminent and clear threat to the United States. We favor a clear strategy for entrance into and conclusion of any foreign engagement and a definable goal that constitutes victory.

We oppose the exercise of executive War Powers in the absence of a Declaration, except in the face of an immediate and direct threat to the United States. We oppose any treaty or international agreement that puts American troops under the control or authority of any other executive or administrative power.

We oppose any mandatory draft registration or conscription. The best military must be composed of those who voluntarily assume the restrictions and burdens of military service in defense of the nation and the principles of the Constitution.

As an essential component of national defense, we favor active state support of National Guard service and complete respect for the individual right to keep and bear arms as the ultimate reserve for repelling invasion or tyranny.

Peaceful diplomatic relations, free trade and open borders enhance the ability of citizens to travel, engage in international commerce and support the pursuit of liberty everywhere in the world.

We support equitable treaties that enhance the security and exchange with other nations, but oppose any agreement that infringes on the sovereignty of the United States.

We support policies conducive to economic liberty, such as the reduction and elimination of all import and export restrictions on private trade, both as a unilateral policy and through multi-lateral agreements.

We favor the phasing out of all foreign aid, or payments to other nations or international bodies, as a form of global welfare and commercial intervention.

Abortion is a critical life and death choice for every pregnant woman. Whether government should intervene to influence that choice is dependent on the legal status of the fetus. We acknowledge that there can be honest and ethical differences of opinion on that status, the rights of the woman, and the proper role of government.

We favor civil discussion of this question, but take no position on the merits of conflicting legal, ethical, and religious viewpoints on either side.

We oppose any allocation of government funds or resources to facilitate abortions, advocate in the public discussion, or to jeopardize the right of any woman to defend her own life and health.

We support a resolution of this issue through the proper judicial and legislative channels specified in the Constitution.